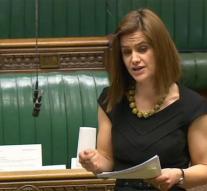 london - In a new poll on whether the British or not the EU should say goodbye, is a majority in favor of EU membership. This reports the British news agency Press Association Saturday.

The claim is based on a poll for the Mail on Sunday newspaper. It goes to all appearances to the first poll since the brutal murder of Member of Parliament Jo Cox, who campaigned for membership.

Of respondents said 45 percent want to remain members and 42 percent said they want to leave the union (Brexit). For the murder of 41-year-old Cox seemed to indicate most polls true that the advocates of the Brexit something to lay on the opponents. For The Sunday Times is just a poll conducted and there were slightly more respondents now for EU membership (44 percent) than against membership (43 percent). According to The Sunday Times has however nothing to do with the death of Cox, but growing concerns about the likely dramatic economic impact of the Brexit.


Cox left opposition Labour party on Thursday was brutally murdered in her own constituency southwest of Leeds. The culprit, according to British media a 52-year-old unemployed man from the neighborhood, Thomas Mair, right-wing extremist ideas. He would have planned the murder and have met his victim in Birstall, over 250 kilometers north of London.