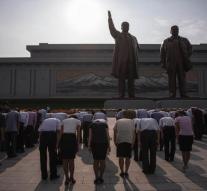 seoul - The number of North Koreans to flee to South Korea in the first six months of this year grew 22 percent compared to the same period in 2015, reported the South Korean Yonhap news agency Thursday based on figures from the Ministry of Unification.

Together managed 749 North Koreans since early this year to take the district to the south. Last year there were in the first half year 614. It is believed that the heavy hand with which the North Korean leader Kim Jong-un rules over his country, more people to flight starter.

According to Yonhap, the total number of North Koreans who escaped to the South increased to 29. 543. The milestone of 30 000 will probably have achieved this year.