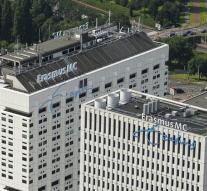 rotterdam - Older people who suffer from standing up too quickly from a sudden low blood pressure, later in life increased risk of dementia. That Erasmus MC concludes an investigation.

Nearly 20 percent of people over 55 suffer from low blood pressure when standing up, also known as orthostatic hypotension. At-75s this is even one in three elderly.

Due to the force of gravity falls in blood pressure in the body when standing up temporarily. To compensate, the heart must work faster, and blood pressure rises again. In the elderly, this is less likely.

' The blackening the eyes and sometimes fainting is because there is a temporary lack of blood to the brains and so little oxygen in the brains. If this happens frequently, it causes damage to the brains that increases the risk of dementia in the long term, '' the researchers said.

According to Erasmus, even small fluctuations in blood pressure are the cause of dementia. The causes of such low blood pressure when standing up are very different. Often it is often associated with diseases like diabetes. But antihypertensive agents may also be the reason.

The good news, according to the Erasmus which can keep the elderly into consideration the disease: blackening the eyes can be avoided by slowly stand up.\n  \n  \n   advertisement

The results of their research, based on data from more than 6,000 people, published this week in the scientific journal PLoS Medicine.