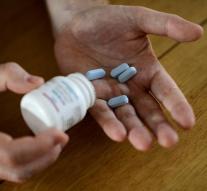 london - More and more people with HIV receive life-prolonging treatment. Worldwide, 18.2 million people have gained access to this therapy. That's according to the United Nations, 1.2 million more than at the end of last year.

In total, lived in 2015 36.7 million people living with the HIV virus. There were about as many as the year before, but the UN is pleased that so many more people can be treated. 'People with HIV live longer. We have made enormous progress, especially in the area of ​​operations, 'said Michel Sidibe on behalf of the UN.

It is true that prevention in Africa needs much more attention. Many young women are infected there by an older man. 'This cycle must be broken. These young women are also less likely to have a good treatment. '