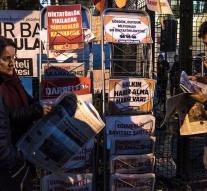 - There are currently at least 348 journalists worldwide fixed. That is an increase of 6 percent compared to the end of 2015. Especially journalists in Turkey must apply to their count since beaten down coup attempt in July.

The figures are from the international organization Reporters Without Borders (RWB). Speaking Tuesday at the presentation of the annual results of a 'witch-hunt of journalists in Turkey.

Turkey belongs in the list of countries that are considered notorious enemies of press freedom: China, Iran, Egypt and Syria. The Turkish authorities have significantly boosted the count of the organization. In Turkish prisons currently staying more than a hundred journalists.

In addition to professional journalists (187), there are for example also arrested bloggers and so-called citizen journalists (146). Worldwide there are 52 journalists kidnapped almost exclusively in Syria, Yemen and Iraq. 21 of them Islamic State is certain that she has been kidnapped.