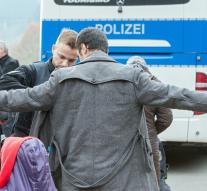 - The number of incidents in shelters for refugees in Germany in recent months increased sharply. The Federal Criminal Police Office (BKA) recorded since the beginning of this year 637 cases. That is more than three times as many as last year, when 199 incidents were counted.

It is mainly about demolitions, incitement and propaganda offenses. But the number of more serious offenses increased. The BKA had 104 violent crimes, including 53 arson. Throughout 2014 these were 28 acts of violence.

The operators of shelters have expressed concern in German media over the figures. " We are currently dealing with the worst wave racistisch- and extreme right violence of the last twenty years, ", said one of them.