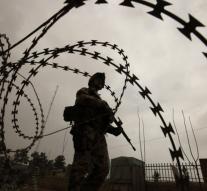 - Germany will send 130 additional troops to Afghanistan. The government decided Wednesday to send more troops, because the Afghan army did not succeed in the Taliban to be the boss. Islamic fighters took early October in the northern provincial capital of Kunduz.

To let the arrival of 130 additional soldiers, bringing the total of German soldiers in Afghanistan at about 980. The German Government did after the fall of Kunduz already know to be open to the soldiers longer in the country. They should now stay until after 2017. The Germans are stationed in the north of the country.