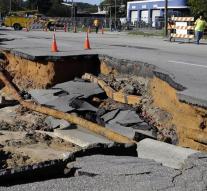 - The death toll in the US state of North Carolina from Hurricane Matthew continues to rise. The authorities confirmed Tuesday that Matthew has certainly claimed eighteen lives. Thousands of people in the state have had to flee their homes because of flooding.

The governor warned ' extremely dangerous '' conditions in the center and east of the state. The water level in several rivers has risen to record levels. Nearly 4,000 people are in emergency shelters.

Matthew founded enormous devastation in Haiti before he moved on to the east coast of the United States. In Haiti were at least a thousand people dead. In the US states of Florida, Georgia, North Carolina and South Carolina have been counted so far thirty victims.