Home / World / More deaths and more than 200 missing in California 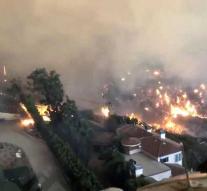 paradise/malibu - The fire brigade in California has the greatest difficulty in getting the fires in the American state under control. The death toll due to the fire seas has now risen to 31. Of 228 people, the authorities do not know where they are.

Another six bodies were recovered in the town of Paradise. The victims were found in their burnt houses and one in his car. The so-called Camp Fire that rages there has now killed 29 people. Another fire, more to the south, claimed two lives. There the famous coastal town of Malibu is threatened by the fire.

The fires are strengthened by the hard, dry wind. It is expected that the wind will continue for the next three days.