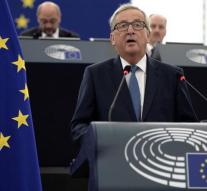 - President of the European Commission wants EU countries to cooperate better in the defense field. For example, there should be a joint European headquarters.

On foreign policy, the Union can perform better, says Juncker. He spoke Tuesday morning at the European Parliament in Strasbourg in his annual State of the Union. After the announced departure of the British from the EU, the question is how to proceed with the European project.

More European defense cooperation need to be at the expense of the relationship within NATO with the Americans, Juncker argued. The EU has no command structure which makes it difficult to set up their own operations.

He also called for a European foreign minister that a European point of view can be expressed much more vigorously abroad. If we want to maintain our influence in the world, then we will have to work together. Where the EU is Syria ?, Juncker wondered.

The Luxembourg Commission President strongly opposed nationalism and populism. He also wants to focus on tackling unemployment. Before that, he dusted off an old investment, which in size and duration is doubled.

Juncker also focused on the digital future. Europeans must be able by 2025 have a 5G network. 2020 should be available free wifi in all European cities.

According to Juncker, the next twelve months will be crucial for the future of the EU. He promised a Europe that the citizens produces concrete results.

Friday meet the leaders of 27 EU countries for an informal together in Bratislava. They are going to brainstorm how to proceed now that the European electorate seems to be increasingly skeptical of the European Union. The British are not invited to the meeting.