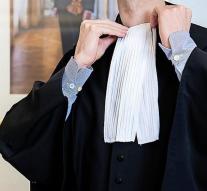 brussels - In Belgium, in recent years, more people have been convicted of terrorism involvement by the judge. Three years ago it was a crime for which almost suspects were sentenced, in 2015 there were 109 and in 2016 the weather dropped to 77.

The Belgian judges in fact condemned a record number of Belgians to a fine, a criminal conviction or a work penalty. There were over 180,000 in 2016, ten thousand more than in the previous record year 2005, writes Het Nieuwsblad, De Standaard and Belang van Limburg based on figures from the Criminal Justice Service.

226 people were convicted of murder or killing, more than 5,700 for strokes and injuries, about 500 for assault of honesty and almost as much for rape.