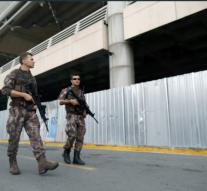 - Turkish police have arrested eleven foreigners suspected of belonging them to a cell of the group Islamic State. Thus were the perpetrators of the terrorist attack on the Ataturk Airport in Istanbul linked, the broadcaster Habertürk on Friday reported on its website.

The arrests were carried out by an anti-terrorist unit of the police in the district Basaksehir, in the European part of the city. The total number of arrests in the case, this came at 24. The police have the message, which was also adopted by other media, not confirmed.


Separately, Turkish security forces held Wednesday four Turkish nationals who were trying to get into the southeast at Oncupinar the country from Syria. According to the local governor they came from territory under the control of IS state.