Home / World / More and more Turks are fleeing to Greece 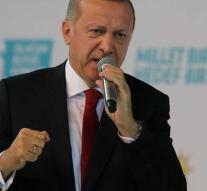 athens - More and more Turks are fleeing their country and applying for asylum in Greece. In July alone, that happened 687 times, reports Greek media. Since the beginning of this year, Athens has already registered almost 2,000 Turks. According to a Coast Guard officer, the actual number is much larger, because many do not report to the authorities. They travel to Western or Central Europe.

The current started after the failed attempt in the summer of 2016 to bring down Turkish leader Recep Tayyip Erdogan. The year before this coup, Greece registered 43 Turkish asylum seekers, in 2016 already 189 and in 2017 even 1827. An unknown number of people were killed during the crossing of the Aegean Sea or the border river Evros.

President Erdogan had tens of thousands of opponents after the coup because of suspected involvement. Due to the economic crisis that is currently taking place, even more Turks decide to leave.