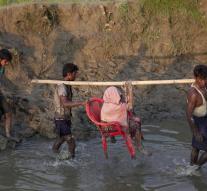 dhaka - The violence in Myanmar estimated that in a few weeks 123,000 Rohingya Muslims fled to Bangladesh. The United Nations warns that aid organizations struggle with the mass influx of refugees.

The displaced Rohingya needs shelter, food and medical care. However, there seems to be insufficient capacity. A UNHCR UNHCR spokesman said the refugee camps were full.

According to refugees, security forces have burned their houses in Rakhine and chased them out. The military forces in Myanmar said only to respond to attacks by armed insurgents on military camps and police stations. In Myanmar, about 1 million people live in Rohingya.