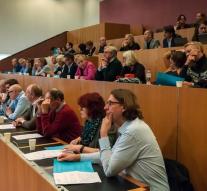 rotterdam - More and more municipalities broadcast live council and committee meetings online. In 2009, 40 percent of all municipalities in the Netherlands did not use audio or video broadcasts, in 2017, it almost doubled to 78 percent. This is evidenced by an inventory of Company Webcast.

This company delivers hundreds of municipalities webcast technology and it annually investigates which municipalities broadcast their public meetings.

However, there are considerable regional differences. Thus, all the municipalities in Flevoland send their meetings, while in Limburg just over half does.

According to Director of Olaf Lawerman of Company Webcast, webcasts are increasingly replacing the minutes because the broadcasts can be retrieved or viewed. The broadcasts are relatively well watched, says Lawerman. '' A municipal council meeting in, for example, The Hague attracts hundreds to sometimes thousands of viewers. Much more than that would fit the public gallery. ''