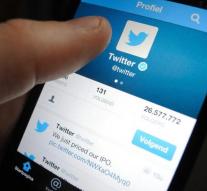 amsterdam - Twitter is counteracting accounts that abuse the medium with inappropriate behavior, compared to last year's ten times. Twitter came on Thursday with figures and results out of measures to make Twitter more secure.

Del Harvey, Head of Twitter's Security and Confidence Team, says, 'We are seeing strong developments by making Twitter increasingly safer, for everyone. Through a combination of technology and a human touch, we can maintain our rules more consistently and transparently.' Accounts that violate Twitter rules get a penalty. For example, they may use fewer features in their account. According to Twitter, it remains at about 65 percent with a one-off penalty.

For beneficial users, Twitter introduced a quality filter, which allows Twitteraars to customize their own feed to their preference and notifications of (unknown) accounts can not be seen. 'There is no quick solution', says Harvey. '' We will continue to adjust and make every effort to ensure that Twitter is the safest place to hear the conversation of the day and hear different sounds. '