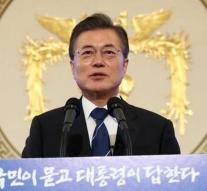 seoul - South Korean president Moon Jae-in warned his neighbors in the north of Monday not to use the annual military exercise with the Americans as an excuse for provocations.

The exercises are 'not meant to raise military tensions on the Korean peninsula,' Moon said Monday after government talks. In his view, it is especially important to test military and civilian preparedness.

Tens of thousands of soldiers, including 17,500 Americans, participate in the annual exercise as part of Monday's preparations for a possible war with North Korea. Last year, North Korea fired a ballistic missile from a submarine.

China called on last week to postpone the practice of negotiating with North Korea.