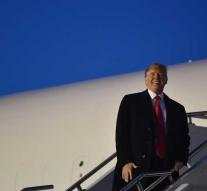 seoul - If it is up to South Korean President Moon Jae-in, American President Donald Trump will receive the Nobel Peace Prize.

Trump should be awarded the prize for his efforts to end the impasse with North Korea on his nuclear weapons program, according to a spokesman for Moon Monday.

'President Trump should receive the Nobel Peace Prize. All we need is peace, 'said Moon in a meeting of his cabinet.

Moon and the North Korean leader Kim Jong-un promised Friday an end to the hostilities between the two countries and to work on the nuclear weapon-freeing of the Korean peninsula. Trump and Kim meet in late May or early June, according to the US president on Saturday. The location and the exact time have yet to be determined.