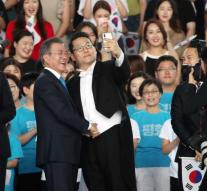 seoul - In order to further shape the rapprochement between North and South Korea, South Korean President Moon Jae-in wants to build roads and railways between the two countries. Construction work must start before the end of this year, reports Yonhap.

Moon spoke on television during the annual holiday on which the end of the Japanese occupation of Korea (1910 to 1945) is celebrated. According to the president, 'true liberation' can only be achieved if the two countries agree on a lasting peace and an economic community.

The rapprochement between the two countries has so far mainly focused on denuclearization. North Korean leader Kim Jong-un and South Korean President Moon have met twice in recent months. A new summit is planned for September. It will take place in the North Korean capital Pyongyang.