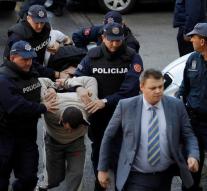 - Police in Montenegro on Sunday on election twenty Serb civilians were arrested for a suspected terrorist. That said, the boss of the Montenegrin state police Slavko Stojanovic.

' They are suspected they tried to gather automatic weapons in order to carry out attacks on government buildings, police and government representatives, including senior government officials '', said the police chief.

In parliamentary elections Sunday, Prime Minister Milo Djukanovic held centrally to choose between closer ties with NATO and with Russia.

Serbian Prime Minister Aleksandar Vukic said that to him nothing is known about the arrests.