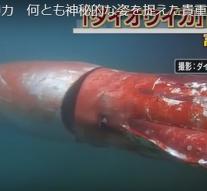 tokyo - A giant squid of 3.7 meters was filmed off the Japanese coast. It is very rare that such a format cuttlefish show on the surface- they normally swim about 650 meters below sea level.

It is the first time we saw such a large squid alive in this place, '' said Tatsuya Wakasugi, one of the managers of the port in Japan.

According Wakasugi stayed the squid for several hours in the harbor and swam several times these next few divers. The huge animal was later returned to the ocean.