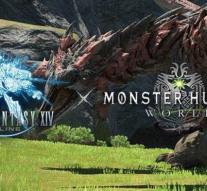 Players can beat Rathalos at the Normal or Extreme difficulty levels for various in-game rewards.

Those who are level 70 and have completed the main storyline of Stormblood expansion, can accept The New King of The Block mission to challenge Rathalos in The Great Hunt trial. This is a fight for eight players with game mechanics that are inspired by Monster Hunter: World.

At Extreme level you fight four players against the dragon and you have to overcome extra obstacles.

These are the Monster Hunter: World-inspired rewards for defeating Rathalos: