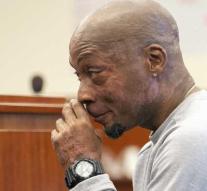 san francisco - Chem Giant Monsanto has to pay millions to a man who told the judge that he has been given cancer by the Roundup glyphosate agent. A jury in the US state of California put the man in the right and determined the total compensation of 289 million dollars (253 million euros). Monsanto appeals.

It is the first lawsuit around the controversial herbicide Roundup. Dewayne Johnson, a former concierge near San Francisco, states that he has become terminally ill through the use of the weed killer. His lawyer had insisted during the session to punish Monsanto with a statement that 'actually changes the world. '

There are thousands of other things going on against the chemistry giant. Glyphosate is also under attack in Europe. The European Union decided last year to extend the permit of the possible carcinogen by five years. This decision is partly based on the opinion of the European food safety watchdog EFSA that the product would not be carcinogenic.

The 46-year-old Johnson used Roundup thirty times a year. According to his lawyer, Monsanto was aware of the risk of cancer, but the company deliberately withheld that information. The chemical giant claims that it can not be established that the cancer is caused by the pesticide.

Johnson's case was handled speedily because of his health. He suffers from a rare form of lymphoma. Doctors argue that he does not have long to live.