Home / World / Monkey on the Autobahn 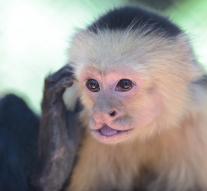 - Passing motorists looked surprised when they top the soundproof wall along the A30 motorway at Rheine in Germany saw a monkey sitting at ease.

The alerted police tried to lure the capucijneraapje with chocolate, but the animal did not show any interest for the delicacy. An assistant called hunter succeeded finally in the monkey, who by now had moved to a tree, to stun and catch.

That the police reported Wednesday. Dolly, as was to be called the marked monkey. She had not escaped from a zoo, but a family living in the vicinity of the highway that holds several monkeys as pets. There she was delivered again.