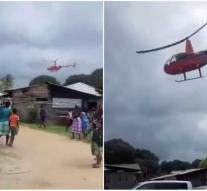 moengo tapoe - The Surinamese politician Ronnie Brunswijk has spread money from a helicopter over the village of Moengo Tapoe. Residents of the village quickly ran out of money, as can be seen on video images.

Brunswijk, leader of the General Liberation and Development Party, comes from the village itself. Opposite the Surinamese newspaper Star News, he states that spreading is not political action, but that he wanted to bring 'a bit of atmosphere' to the village.