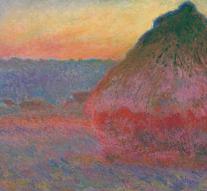 - A painting by the French painter Claude Monet Wednesday at an auction at Christie's in New York, a record $ 81.4 million completed (over 76 million), while the estimated revenue was $ 45 million.

So far was the auction record for a Monet painting at $ 80.4 million at an auction of a painting in 2008.

The Impressionist painting titled 'Meule' showing a haystack comes from a series of 25 paintings that Monet did from 1890 to 1891. Most of them are owned by museums. The same painting was auctioned in 1999 for 11.9 million dollars. The current seller acquired the work outside an auction in 2002.