Home / World / Monet, Cezanne and Gauguin together in Paris 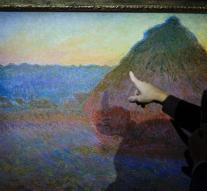 - Masterpieces of the famous artists Monet, Cezanne, Gauguin, Picasso and Matisse first come together in a unique exhibition in Paris. The 130 paintings are invaluable. They come from Russian museums and have never been seen together. But after two years of negotiations at the highest level, the Louis Vuitton Foundation scoop.

The paintings have ever been gathered together by the wealthy Russian patron Sergei Ivanovich Shchukin and were later confiscated by the communist government in the Soviet Union. Dictator Josef Stalin given in 1948 that the collection was to be divided between the Pushkin Museum in Moscow and the Hermitage in Leningrad (now St. Petersburg). The exhibition will last until February 20, 2017.

The Louis Vuitton Foundation is a private museum which was built for the art collection of Bernard Arnault, founder of fashion house Louis Vuitton.