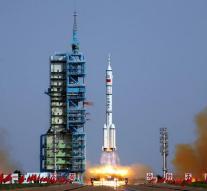 - China launches Monday the spacecraft Shenzhou 11. The two-man crew is thus brought to the space lab Tiangong 2. They will stay there for a month while they perform various tests, including in the medical field.