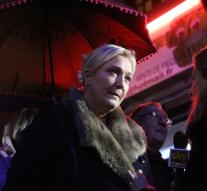 - France will be held Sunday in the second round of regional elections. All eyes will be redirected to the nationalist National Front of Marine Le Pen. The question is whether the party will achieve the same result as in the first round a week ago.

Then took the party of Le Pen almost 30 percent of the vote. In six regions the National Front gained a majority. In the northern region of Nord-Pas-de-Calais Picardie- made ​​party leader Le Pen himself as party leader, and she got 42 percent of the electorate behind him. Her 26-year-old niece Marion Maréchal-Le Pen won almost the same score in the southeastern region of Provence- Alpes- Côte d' Azur.

In these two regions do the socialists in the second round for nothing. She withdrew after the first round back in the hope that the center-right party of former President Nicolas Sarkozy will attract enough votes for Le Pen to cut off the pass.

As of January 1, 2016 France has eighteen regions, five of which are overseas. Currently there are 27.