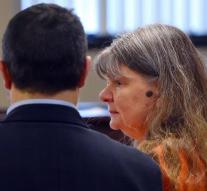 - A 59- year-old woman on Wednesday in a court in the US city of Utica announced that it has participated in the murder of her nineteen- year-old son Lucas in a church. A second son, the seventeen-year-old Christopher, was seriously injured.

The leader of the World-of-Life Church in New Hartford had organized the beating because the boys wanted to leave the church. The incident occurred on the night of 11 on 12 October. The priest and eight other defendants, all members of the same church who participated in the beating, to appear next week before the judge. The indictment includes murder, kidnapping and group violence.