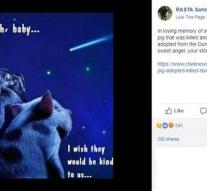 vancouver - A Canadian couple became public enemy number 1 after the couple adopted a potbellied pig from a shelter and then consumed the animal with skin and hair. Staff at the shelter, who had lovingly nursed Molly, are devastated. 'We feel defeated.'

The Vietnamese pot-bellied pig temporarily stayed in the center in the Canadian city of Vancouver. There Molly was pampered every day. Because the animals that reside there are finally getting a new home, adoptive parents were sought for Molly.

The fact that the pig did not have a great home waiting soon became clear. The man and the woman- who bragged about the massacre on social media- saw nothing but a nice piece of bacon in Molly. This to the great anger of the shelter and other animal lovers. 'You have to be a special kind of person to adopt a piggy from an animal shelter just for food', an employee writes on Facebook. 'We feel lost and defeated. '

Also on Twitter there is fierce reaction to the action of the Canadians. The hashtag #MollyThePig was quickly trending. 'My heart is broken,' someone writes. Another: 'It will not be much more careless than this. '

Moreover, the animal shelter has let it be known that a piggy will never be offered for adoption again. 'The chance is too great that an animal will land on someone's plate again. '

The couple will not be punished after the mutation. In Canada it is not forbidden to kill and eat a pet.