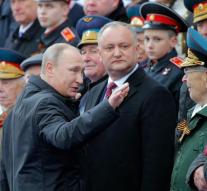 chisinau - The pro-European government of Moldova has expelled five Russian diplomats on Monday to anger the Moscow-supported president of the country.

The government did not announce any reasons for the measure. The Russian ambassador confirmed the step but did not give details.

President Igor Dodon called the government's decision 'insane. 'In a statement on his Facebook page, he said it was' probably done on behalf of the West, perhaps even from the other side of the ocean. 'The decision would be to undermine ties with Russia.

Russia still has soldiers in Transnistria, part of the former Soviet republic of Moldova, where many Russians live. Moscow is trying to prevent rapprochement between Moldova and the European Union.