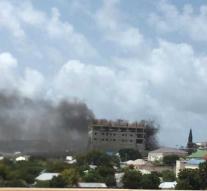 mogadishu - The Somali capital Mogadishu has been startled by two explosions on Saturday. A suicide attack with a car took place near the presidential palace and other government buildings. Shortly afterwards an explosion followed at a police station, a police spokesman told.

According to local media, three cars with armed men would have been driven through the fence of the Ministry of the Interior after which a gunfight broke out.