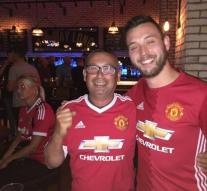 manchester - In Manchester, a modest, but in some places, a rather exuberant party is celebrated after the victory at Ajax. It was very crowded in the pubs that broadcast the game, because Shambles Square, with most of the football pitches, is still set in the wake of Sunday's attack.

Unlike in Amsterdam, the match in the English textile city was nowhere broadcast on a large screen. This was not planned for safety reasons, but also for the attack. That's why the real fans gathered early in a number of pubs where the game could be seen. That occurred, before the game started, some bumps were because it was very busy.

A city torn by terrorism is hard to notice when the last fluctuation signal sounds. From several pubs, supporters run up the street, and even police officers who guard the deposition of the Manchester Arena can not hide a smile and share congratulations.

In the Yates bar, at about 400 meters from the place of the attack, it is still quiet during the first half. Only when the 2-0 is scored will songs be used and an atmosphere that fits a European final will be created. But at the last whistle signal a small party breaks. There are only a few fans with a football shirt, but father and son Campbell do. Son Frazer moved from Scunthorpe to Manchester six years ago and grew up with the club. 'We are proper fans!', He answers. Asking why they support this club, father Andy, 65, answers: 'Why? Is that a serious question? Why do you like sex? It's a passion!' They had won a ticket for the final as regular supporters, but a trip to Stockholm was a bit too pricey. That's why they are in Yates.

At the time of the end signal, Andy shouts: 'This feels like an orgasm!' What son Frazer finds of his father's language? 'Wait, but if you feel it, you'll get it.'