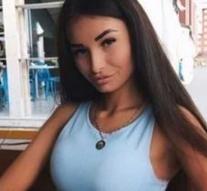 - A Russian model broke her back when she jumped from the sixth floor of a hotel in Dubai. The reason: she fled from a man who wanted to rape and murder her. The Sun writes this on the basis of reports in Russian media.

Her back is broken and some vertebrae were crushed. She can no longer walk or move and is waiting for an operation. And all that because she jumped from a hotel on the sixth floor, because she was chased by 'a rich foreigner'. He became angry when Ekaterina Stetsyuk rejected him. 'He attacked her and tried to kill her,' Russian media write. It is actually a miracle that she is still alive, say friends of the 22-year-old model. Because her spine is still quite, the doctors see hope for recovery.

The attacker was arrested at the airport while trying to escape Dubai. In sentencing he can face fifteen years in prison. During the interrogation he tried to turn off the blame and he brutally filed a complaint against the model; the details are unknown, but presumably he claimed that she was an escort, a profession that is strictly forbidden in Dubai. The model was then arrested while lying in her hospital bed.

In a video message to her mother Inge the model later said that everything went 'well with her', even though the operation was postponed for a while. She also said that employees of the Russian consulate visited her. 'Do not worry, Mom. 'In the meantime, her mother has set up a crowdfunding campaign with girlfriend Irina Gorssman to pay the medical costs in Dubai of around 11,000 pounds.