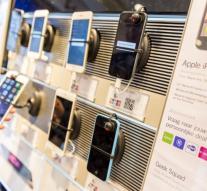 - The mobile market has shown signs of stabilization in the Netherlands. According to market researcher Telecompaper telephone operators saw their sales in the third quarter year on year decline again. But the decline was much less pronounced than in the previous quarter.

The providers could benefit from accelerated growth in mobile data traffic. They also had fewer problems with the regulation of tariffs. Revenue and market share of T-Mobile continued to decline, while KPN has strengthened its position as market leader. Vodafone also managed to increase its market share.

Combined revenues from mobile services such as calling, texting and internet slumped in the third quarter by 1 percent year on year to 1.27 billion euros. Compared with the second quarter, there was an improvement of 2.2 percent.

Telecompaper expects the companies their services revenue throughout 2015 with two percent saw a decrease to around 5 billion euros.