Home / World / Mnangagwa sworn in as President of Zimbabwe 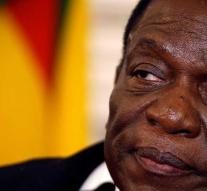 harare - Emmerson Mnangagwa is sworn in as President of Zimbabwe. He took the oath of office during a ceremony at a stadium in Harare.

The swearing in fact should have taken place earlier, but was postponed due to a vote on the election results. The opposition had stepped to the constitutional court with complaints about tampering. That supreme court ruled Friday that it has not been proven that Mnangagwa fraudulently won the July election.

Mnangagwa received just over 50 percent of the votes in the presidential election last month. Opposition leader Nelson Chamisa maintains that he is actually the winner. On Saturday, he admitted that his legal possibilities were exhausted. Chamisa stated that the summit of his party will meet later to discuss next steps.