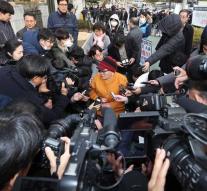 seoul - The South Korean Supreme Court has ordered the Japanese company Mitsubishi Heavy Industries to pay compensation to former Korean forced laborers. They had to work without payment in the company's factories during the Second World War, the South Korean news agency Yonhap reported.

The Koreans worked in 1944 in, among other things, an ammunition and an aircraft factory. According to the court, four women are entitled to compensation of 100 to 120 million (78. 000 to 94. 000 euros), six former forced laborers must receive 80 million.