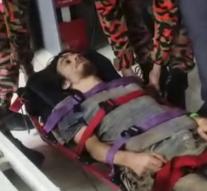 - A young Australian who disappeared last month in the Malaysian Borneo jungle is found after an extensive search in a canyon called Hidden Valley. The 25-year-old Andrew Gaskell who was missing since October 20, has been weakened but alive localized in Gunung Mulu National Park, authorities reported Wednesday.

Gaskell survived his ordeal to eat including through ferns. He was drawn to the rainforest of Borneo in August to get to know themselves better on a trip through Asia. He described himself in announcing his trip as ' a disgruntled engineer '. He is admitted to a hospital on the north coast of Borneo.