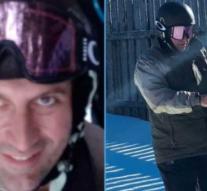 sacramento - The California police are still trying to figure out how it is possible that the 49-year-old skier- who disappeared from the snowy New York a week ago- was found six days later in warm California. The man was confused and- perhaps even stranger- had his ski suit on.

Constantinos 'Danny' Filippidis told the agents that he has no idea what happened. The fireman got lost in the Whiteface Mountains in New York during a ski trip with colleagues. Eventually, the Filippides appeared in Sacramento, about 4800! miles from 'The Big Apple'.