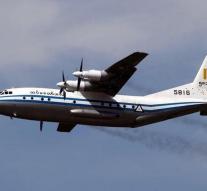 yangon - The Myanmar Navy found the remains of the missing plane from the country on Thursday. Also, the naval ship has stored two adults and one child's bodies at about 35 kilometers from the city of Launglon in Myanmar. That was announced by the army on Thursday.

An Air Force from Myanmar disappeared Wednesday of the radar in the Andaman Sea. According to the army, the unit had 122 people on board, including soldiers, relatives and crew. According to the statement, a plane wheel was also found of the missing Y-8-200F, a Chinese-owned aircraft.