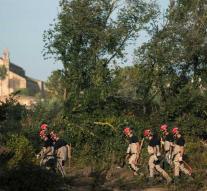 palma - On Mallorca is still looking for the disappeared boy, Artur, of six years that went missing last Tuesday after the heavy weather. According to the Spanish newspaper El País he has a Dutch father.

A local resident walking along the bay yesterday found a backpack in Cala Morlanda, south of S'Illot, near the sea. According to the police, the backpack of the missing boy is Artur. Rescue workers from the fire brigade, emergency services and police are now looking for him more in the vicinity of the sea. Two days earlier a backpack was found, but according to the police this is from the sister of Artur, the girl Ursula of five years old. She could be saved.

Initially, in his own village Sant Llorenc des Caddassar was searched for Artur. This happened near the roundabout where the mother of the children (according to El País, a 40-year-old apothecary from Manacor) walked with her two youngest children on their way home, when she was overtaken by the rising water. After the severe weather, a normally dry river had crept out of its banks- which surprised the village and its inhabitants completely.

The mother of Artur, Joana died on Tuesday when she was overtaken by the water on her way to her home in Manacor. According to El País, the police thinks that they took a detour via a B-road just to avoid the heavy rainfall. But at Son Carrió she was suddenly attacked by the water of the river Ses Planes that had fallen outside its banks.

From that place she would have tried to call her Dutch husband. He was not in the village, and she would not have been able to reach him because the telephone lines no longer worked. She did have time to work her daughter Úrsula (5) out of the car. The girl could be brought to safety by a German who cycled by. The mother and her son Artur would also have stepped out, according to El País. They would then have been dragged along by the strong current. The police found the body of Joana in the canal on Wednesday after the deluge in Son Carrió.

The family still has a third child of eight who was not in the car. The Dutch father of the boy would be looking for his son together with friends at the moment.

Little Artur wore a blue polo when he disappeared. The boy is the last missing since the severe weather last week in Mallorca. Twelve people died and 200 people had to leave their home.