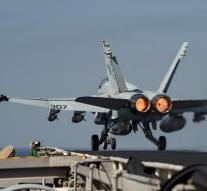 - An American fighter pilot is deceased Wednesday after his plane had crashed for the coast of Japan. About the cause of death of the soldier is not disclosed.

Captain Jake Frederick went missing after his F / A-18C crashed during an exercise. He used his ejector seat to leave the plane. Japanese and US rescue teams were searching for him, but the relief finally came too late

US forces have released to date little about the crash of the fighter jet. There would still research to be done into the cause of the crash.