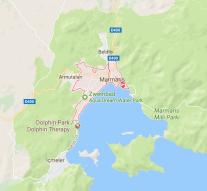 ankara - Three people are missing after sinking a cruise ship Wednesday for the coast of the popular resort of Marmaris in the Turkish province of Mugla. Eight people could be saved from the sea after the accident.

Due to unknown cause, the ship sank very quickly, according to Turkish officials. Among the missing people is the owner of the vessel.