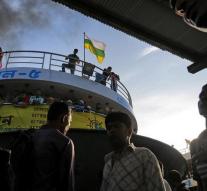 dhaka - Dozens of people are missing after the sinking of a ferry in a river in Bangladesh. The accident happened Wednesday when the bank where the ferry was moored collapsed. A large amount of mud came on the vessel up making it disappeared under water.

The police have certainly dragged 35 people on board. So far, the bodies of two women were recovered. The search for possible survivors is still in full swing. In the watery Bangladesh incidents often overcrowded boats almost the order of the day. The government promises to take each time measures to prevent more mischief.