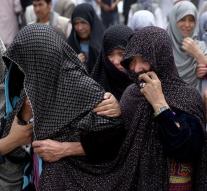 - A rocket attack in the center of the Afghan capital Kabul on Sunday made no casualties. In many embassies in the area, the sirens went off. The embassies are very wary of violence after the attacks Saturday during a demonstration. There were eighty killed by two suicide bombers who blew up. It is not known who fired the rocket.

In the Syrian capital Damascus Sunday seven people were killed in the impact of a mortar in the famous Bab Tuma, a district in the city center which is firmly in the hands of the forces of President Assad. The Observatory for Human Rights reported that the explosion dozens of people were injured. Rebel attacks on the city neighborhoods are uncommon.

Same Observatory reported that four hospitals have been hit by air strikes by the Syrian government in Aleppo province, including three in the same city. To our knowledge there was damage and there are cases no casualties.