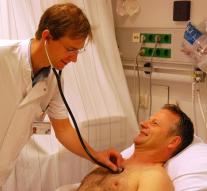 leiden - Dutch general used rarely or never his stethoscope to listen to the heart of the patient. Hence are missed often valvular heart disease.

The gadget depends mainly to the doctor's neck, is in a jacket pocket, hanging on the coat rack in the office or anywhere swinging on the desk.

Research on aortic valve problems in nine European countries among 8800 patients from 60 years shows that the Netherlands is the lowest scores when it comes to the use of the stethoscope in research on the heart. In only one out of 10 doctor visits (11 percent) is used for that purpose this listening device. In France, this is done in seven out of 10 visits (69 percent).


By far the most lean Dutch GPs, especially with regard to the heart, to more advanced techniques such as ultrasound and CT scanning, the study shows. Almost all their 'heart diagnoses' they therefore refer you to the hospital. Powered by the family doctor missed diagnoses still be intercepted there.

It is 80 per cent of the Dutch respondents in European research into cardiac valve diseases noticed that the doctor rarely uses the stethoscope to analyze sounds of the heart. The stethoscope, which include a fixed component to be the instruments of the doctor, it seems to become in the Netherlands is no longer a symbol of the physician or the medicine.

By far the most lean Dutch GPs, especially as regards their heart research on more advanced techniques such as ultrasound and CT scanning. Without even having used their stethoscope, many refer nearly all their patients with suspected heart problems automatically to the hospital. Sometimes they send the patient back home, because 'nothing is going to get you to worry about.'

Heart problems that may be missed by the family doctor often intercepted in the clinic. But sometimes it turns out- the resulting 'lag'- the heart condition of the patient in the meantime to be more severe than necessary.

Frank van der Kley is one of the researchers in the study.,, A heart valve defect, such as an 'aortic stenosis (constriction in the outflow opening of the left ventricle), with the stethoscope can already be detected at an early stage. It is a common condition in the elderly that often leads to shortness of breath. High time it is, for better awareness of the stethoscope and timely diagnosis of valvular heart disease in physician and patient. This will avoid unnecessary hospitalization and sudden death. '

In severe aortic valve stenosis is the likelihood of survival without intervention halved within two years and only 20 percent after five years.

Van der Kley, who will graduate at the heart valve research, agrees that the Dutch GP in this regard too is heading on advanced techniques.,, Although actually an old tool, the stethoscope is very easy to use and clean to identify abnormalities such as strictures and heart murmur. You put him in the heart and you will immediately hear whether it is good or not. Even with the flu, I use him. 'And, continues Frank Van der Kley:,, My father was seven years ago cardiologist- in the Haga Hospital in The Hague. All his diagnosis he first made with the stethoscope. '

Utrecht's cardiologist dr. Janneke Wittekoek specializing in the woman's heart, it fully agrees with the conclusions that the stethoscope is hung by most Dutch GPs career. She speaks of holistic diagnosis:,, The first patient contact, we must use all our senses to make the best possible diagnosis. The stethoscope is indispensable. This can not and should not be 'taken over' by advanced equipment. '

Wittekoek took the words of a patient who remarked recently during extensive physical examination 'What fun (...) you are currently using a stethoscope.,, I use it daily, and find it incomprehensible that a colleague me this week at a cardiology conference in Rome said that the stethoscope has since been 'a discussion'... '

Not all GPs, contacted by this newspaper, wanted to address the question of whether it does or not stethoscope for heart research. They found that question 'irrelevant' or 'illogical'. Indeed the still oldest practicing physician in the Netherlands, C. M. van Hasselt (92) from Amsterdam-Buitenveldert. He proposes a daily basis to use the stethoscope to listen to the heart.,, That's how I was trained. In my years of training, there were no echoes stuff. If there is something wrong with a heart I hear. Even the place where a noise sounds or narrowing is. 'And doctor Robert Mol from Capelle a / d IJssel says the stethoscope with him permanently in use.,, Virtually every patient with heart or lung problems I use it. Standard!'