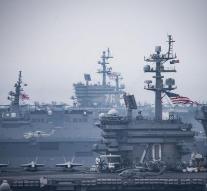 washington - Seven days after a US sailor had fallen aboard, this was found alive and well. Not at sea but just on the ship USS Shiloh in the engine room. That reports Navy Times. It is still unclear how the man kept alive and where he kept himself exactly hidden.

The sailor has now been transferred to another ship. The US Navy held a huge search for Japan's coast, where helicopters, hunting planes and the coastguard were deployed.

The navy searched an area of ​​14,000 square kilometers. After searching for fifty hours, the sailor became extinguished.