Home / World / Mischievous toddlers go away with mom's self tanner 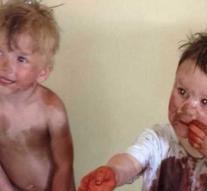 dunfermline - Is this the reason that you can never leave self-tanning unattended? The Scottish mother, Billie, shared photos of her 2-year-old son and a friend on Facebook. The mischievous boys were suddenly suspiciously quiet and when the mother caught them they were under the self-tanner.

Billie Fotheringham (19) did not believe her eyes when she saw what her son Kyle (2) and his playmate Leo (3) had been up to. This is how Nieuwsblad reports.

The boys had managed to fish the new bottle of self-tanner from the cupboard and smeared each other with the tanning cream. 'At first I thought they were hurt, but when I realized what was going on, I burst into laughter,' said the mother.

The boys still have brown spots on their bodies. Even after a few hours of being in the bath.