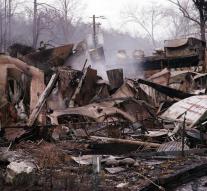 - US police have two minors arrested last month, wildfire would have caused in the state of Tennessee which fourteen people died and 1,700 buildings damaged or laid in ashes. The two are indicted, according to US media.

The fire started on November 23 at the edge of the Natural Smoky Mountains. The fire spread to include the site Gatlinburg which was evacuated and where the fire caused great damage.

The two youths are from the state of Tennessee, but not in Sevier County where the raging fires. What they have done to afford the fire is not known.